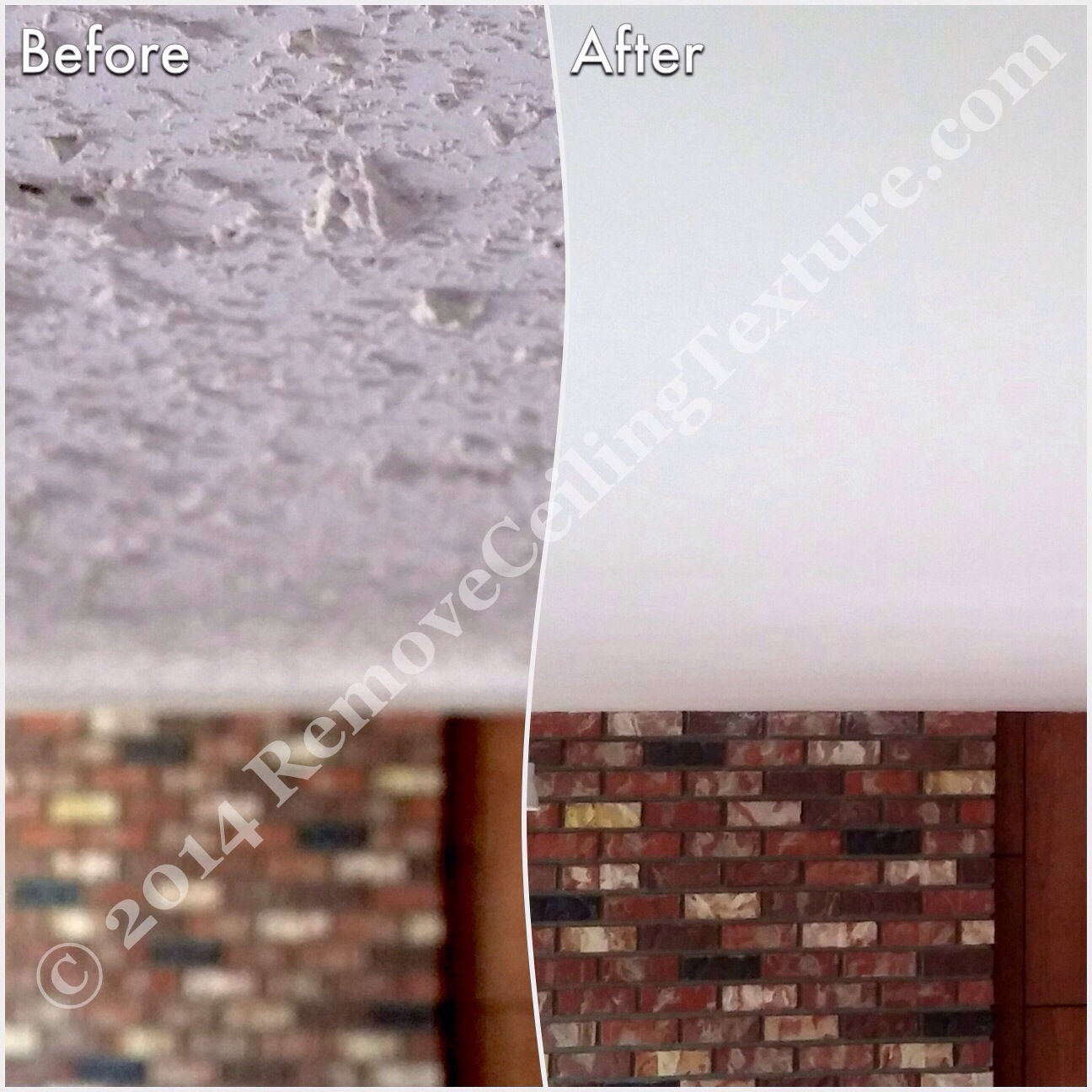 There are several things known to make most people cringe. Looking through old photos from the 80s when hair height was a competitive sport.

Seeing the person in front of you at the cashier open up her little change purse. “96 cents? I think I have that in pennies somewhere in here. One, two, oh, woopsie, that one’s not a penny, it’s a lint-covered alka seltzer.” I’m pretty sure this is the reason the penny is now outlawed in Canada.

People also cringe when they see textured ceilings when viewing a home to purchase. We get calls all the time from people who have viewed a home but the textured ceilings are turning them off. They want to know if it can be removed before they’ll even think about putting in an offer. Or they’ve already bought the house but they reduced their offer because they knew they would need to have the texture removed. Removing popcorn ceilings is often first on a new homeowner’s list of renovations.

Removing Popcorn Ceilings the Smart Way:  Get it Right the First Time

We recently encountered a similar situation in Langley.

The homeowners had purchased the house a few months earlier and were now starting renovations. First up was removing popcorn ceilings. They called a few people to come out to give them quotes. These were drywallers and jack-of-all-trades handymen. They also called us at RemoveCeilingTexture.com. We were the last to have a look. The first thing we asked was what year the home was built (it was from the 70s) and if the ceiling texture had been tested for asbestos. They told us no, the texture had not been tested and that the other contractors didn’t mention, or even seem to know about the possibility of asbestos in the ceiling. Asbestos is seen in some ceiling texture even into the early 1980s, yet the contractors were willing to just scrape it off because they didn’t know about the danger. If the texture had asbestos, they would be putting the health of the homeowners and their new baby at risk. Not to mention risking their workers’ health. The first thing we suggested was an asbestos test. We can still provide smooth ceilings if there is asbestos, however, it turned out that their texture did not have asbestos, so we would not need to take extra precautions.

There are several problems with hiring people who are not ceiling experts. At best, you could end up with a sub-par ceiling. At worst, however, your health could be compromised. Removing popcorn ceilings, and other types of ceiling texture, is something we do every day. Another problem is that they may quote you a low price, sometimes even sight-unseen. After the work is done, the real price often becomes apparent. Extra charges are sometimes added to the bill. At RemoveCeilingTexture.com, we’ll come out to have a look, at no cost to you, to make sure we know exactly what the job will entail. That way, when we give you a quote, that’s the amount you’ll pay, with no hidden fees or extra charges.

The homeowners in Langley made the right choice and hired us to give them smooth ceilings. They were very happy with the results. If you’re wondering about removing popcorn ceilings, or other types of ceiling texture, give us a call today at 604-420-7578 or contact us by email to find out how you can get smooth ceilings. We don’t charge to come out and have a look, and our quotes are always obligation free.

Thinking about removing popcorn ceilings? Contact us today for a FREE quote!